I love this board. It is my third Board (Ecomobl ET, Backfire Zealot and Titan X) and i fell in love with it immediately. It's really carvey yet super stable at higher speeds, it looks GREAT and I (82kg) get about 40-43km of range with the AT wheels. Customer Service was great so far. It's really a great board for that price!

A
B-ONE Hercules Carbon 2WD Electric Skateboard Anonymous
Amazing board!! But had an issue.

I Will start off by saying I absolutely love this board! The speed is great. Hill climbing ability top-notch with superb range. But at only 35 miles on the board with the cloudwheels my drive bearings and wheels bearings on my back right wheel fall apart causing a dangerous abrupt stop. Also forcing me to walk 8 miles with a 30lb board. I had now replaced these faulty items with 2nd hand parts. Other than this love the product and brand. 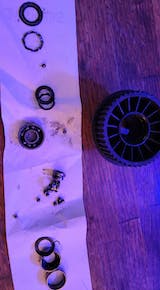 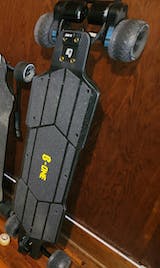 Right off the bat I must say this board is insane value in its category. Shipping took slightly longer than advertised but I live in New Zealdnd, at the end of supply chains, so this was expected. Unfortuanately the board arrived faulty and would not charge. Support was easy to reach and Gerald was quick to answer and help work the problem out. After a month of trials and new parts we finally got the baord working and its insane! The top speed is almost 50Km/h, but stays stable. The range is also a solid 40-45km on the 6in wheels even when I'm riding rough in cold-ish weather (15C). The motors barely heat up even on long inclines, and the battery is quite good, even thought the acceleration is rather limited even in speed mode 4, the board can easily power up steep hills at 15-20Km/h where my onewheel would struggle. Some shortcomings of the board are plastic pulleys for the wheels, I was expecting metal, a few loose screws holding the enclosure plate, but unless you need this to be watertight (and it isn't) thats not a big issue, and also its impossible to fit the carry handle to the rear withought modification due to the brake light. Also the battery indicator rather quickly jumps from two bars to 20% and then super quick to 10%, abttery sag only sets in around 10% aswell. The biggest positive in my opinion is the included headlight, it may seem like a small gimic, but let me tell you that thing is amazing. Super bright, and the battery lasts 4 hours in my experience, thats ages. The remore charge lasts rather long aswell, only requering a charge very 3rd or 4th board charge. Ive done 300km on the board so far and it seems to be doign great. No offroading jsut yet, but I think it will be able to handle light trails.
Final thoughts: This thing is insane value, I'd even say its better than a Hadean in value. Only time will tell if this Hercules is worth the money. I'd give 5 stars but the board not charging for a month pains.

the board is great it is stable at high speed but remains carvy the wheels absorb all the imperfections of the road small flat on the duration of the battery which announces 55 km of autonomy I am less than 75 kg and in mode 3 I have managed to do barely 40 km and a pity that we cannot modify the kilometric range of the modes.
but the board remains incredible

Honestly couldn’t be happier with the Balrog. After riding Wowgo boards (2S, 3X) and looking for an upgrade, the Balrog proved to be absolutely perfect for me. Far more range than the WowgoAT and other comparable boards, with fantastic speed and control, and a quality build. I’ve played about with different wheels and customised the look of the board, and absolutely in love with it. Commuting long distances on a daily basis has never been so fun.

I've been Eboarding since last September, got a sharkboard Lite. Speed was okay, extremely disappointing range, upgraded to a high tier board. Wanted the Zeus but stock and shipment couldnt come soon enough. The Titan is a beast!!! 165lb. rider, my highest speed is 40 mph, (verified with mobile GPS app) and my furthest ride was something over 20 miles, and that was ripping it max speed. Good LORD this thing can haul ass forever. Too long for most of your feet to handle. I just realized the remote can be reset to display MPH and I also had the gear ratio and other settings incorrect since im using street wheels. Adjusted those as needed and the torque and acceleration went WAY up it's like a whole new board! Recieved the board 53 days ago, have since put 480 miles on it. Not a week goes by that i dont spend at least 6 hours on it... this is the future and the vehicles i keep up with on a residential roadway know it too. 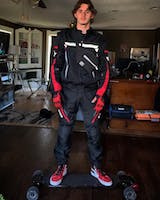 This is a great 2-in-1 board. One of my favorites. Highly recommend. Look forward to new and improved battery cells, bushings and pivot cups.

E
B-ONE Hercules Carbon 2WD Electric Skateboard Erik Eklund
Havent got the board yet, 25/5 its 2 months from order.

this board works perfectly, smooth but powerful acceleration, very good turning ability. I have done 45km with the 7 inch wheels, my weight is 80kg and I have used 85% of the battery so I cannot be more satisfied with the range of this electric longboard. Arrived with a little delay caused by covid but the customer service in the process was perfect.

Well I can't say yet

I haven't received the item yet, can't even track package. Cannot review

It's Definitely A Well Made Board With Great Control And Exceptional Quality. I Am Glad I Purchased The 2 In 1 Set Up. It Has A Great Carving Experience As Well As Top Speed Control. I Hit 34MPH On The AT Set Up 7 Inch Wheels And Have Had Good Control. B-one Has Quick Responsive Customer Service, Customer Service That Helped Me Set Up My Remote To Board And Answered All My Question's As Well As Got My 175x50 And 120mm Cloud's And Grey Remote Cover Right After I Ordered A Different Setup. I Orginally Ordered The 150x50 Setup 2 In1. They Listen And Really Came Through. I Am Looking Forward To How They Respond And React If I Ever Have Any Board Failures Or Issues. B -One Is Here To Stay! I Enjoy A Board That Has The Right Amount Of Power. They Set Up Two Different Style Trucks And Good Bushings That Make The Board Just Right.

So far the customer service is on point and very punctual. Very responsive and kind. Unfortunately i still haven’t received my board until now after 18days.

Haven’t received it yet.

Due to the good grip, street performance is great... carving is quite easy, when you get used to the higher riding position The wheels provide better ground clearance and add some extra cushioning, for more comfortable off-road riding. Love them, but in muddy /wet conditions tires with more profile/tread are the better choice.

Important: The standard belt cover doesn't fit (tire width), you'll need a smaller one, which is included in the "7" wheels & kits"

item has arrived with in the specified time frame for air freight. package in good condition and content is very well packed and presented. Very impressed now that I’ve actually seen the board in person. Looks the beast. Will follow up with a riders review after a few weeks. 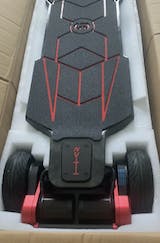 The page came very fast and very nice wheels. thanks B1

Nice for carving, not only on smooth surfaces. Easy riding on forest paths and meadows, but in steep terrain and muddy conditions some wheel spin will occur.I guess for heavy conditions the off-road tyres are more suitable, but at the moment they don't sell it here at B-One. Always check the pressure before riding, to get the maximum out of these tyres. Super happy with the performance!!!